So I will be making the assumption that the reader is knowledgeable in these topics.

In the paper Fine-Grain Parallelization of Entropy Coding on GPGPUs, Ana Balevic describes how Run-length encoding(hereafter abbreviated RLE) can be implemented on the GPU. Although the paper is very sparse on details, I have been able to implement her approach in CUDA. For the purpose of providing a supplementary document to her paper, I would now like to go through how I implemented this technique in CUDA.

Before I begin, I want to mention that I have provided an implementation of the technique on github.

Now, it should be obvious that the above compression scheme should be extremely easy to implement on the CPU. A simple CPU implementation is given below

But as can be seen the above algorithm is an extremely serial one, so implementing it on the GPU can be a bit tricky. In fact, a large majority of compression algorithms are all very serial algorithms(examples of such algorithms are arithmetic coding, LZW, and so on), and therefore hard to GPU accelerate. However, it would also be very nice if we were able to implement them on the GPU. That would allow us to, for instance, implement fast video codecs.

So, I shall now show how we can implement RLE on the GPU. Ana calls this algorithm Parallel Run-Length Encoding, which we will from now on abbreviate PARLE. Throughout my explanation, I shall through images illustrate what happens to the input array [1,2,3,6,6,6,5,5], as we run it through the compression algorithm. Also, I shall henceforth refer to this input array to as in

The first step of the algorithm is that we construct a mask from in. We call this mask the backwardMask, and it is constructed as follows: For every element in[i], we assign a thread, and that thread compares the current and the previous elements for equality. If they are not equal, backwardMask[i] will be 1, and otherwise, it is 0. However, the first element does not have a previous element, so, for reasons that will soon become clear, we always set backwardMask[0] to 1. The construction of the mask is also illustrated through the below image.

From the above illustration, we can draw a simple conclusion; backwardMask encodes the beginning of all the runs. So if backwardMask[i]==1, that means that at i a new repeated runs of characters begin. Now it should be obvious why we said that backwardMask[0] == 1.

From the above description, we can now easily implement a CUDA kernel:

Where i becomes the thread id, and n is the length of the input array. And the above kernel is launched like

And note that I am using Hemi to launch the above Kernel. Launching CUDA kernels by using Hemi is nice, because it will choose for you automatically a grid and thread block size that, for your specific graphics card, gives you a nice amount of occupancy. So it saves you from having to manually twiddle with thread block and grid sizes.

Also, in order to assign a thread to every element, I am using yet another nice utility function from Hemi: hemi::grid_stride_range. This function implements a grid-stride loop in your kernel, which is much more flexible than the traditional approaches. You can read more about this here.

So that is how we construct backwardMask. In the next step, we run an inclusive prefix sum(also called scan) on backwardMask, and we will call this prefix sum scannedBackwardMask. The result of the scan is the below

We can see that the prefix sum encodes a very important piece of information. It encodes the output location of all the compressed pairs!

For serial algorithms, such the RLE implemented on the CPU above, knowing where to output the next element is often easy; you just output to the next free spot in the array. However, doing the same thing on the GPU is considerably more difficult, because we have lots of threads working at the same time, and we have no idea in which order they finish. As a result, finding the next free spot in the array is often impossible. Instead what you often do, is that you basically twiddle with prefix sums until you get what you want.

So that is why we are computing a prefix sum. In the next step, we will have to create yet another auxiliary array. But fortunately, this will be the last one. This last array is called compactedBackwardMask, and it is slightly more tricky to understand than the other two.

At this point, we are very happy, because we know all the locations of the output pairs(encoded through scannedBackwardMask), and we know which symbols are being repeated(encoded through backwardMask. We basically just have to output symbols from the positions where the mask is 1). However, we do not yet know how the long the runs are; 6,6,6 is compressed as the pair (3,6), and at this point we know 6, and we know the output position of the pair, but we have not yet calculated 3.

But, if we could now obtain an array that stores the indexes of the beginnings of every run, we would be very happy again. Because we could then calculate the run-lengths by subtracting the current element and the previous element from each other in that array. And constructing such an array is not very difficult. A kernel that implements this is given below

Basically, what we do is that we run a thread for every element in scannedBackwardMask. If the current and the previous elements are not equal, that means that a new run starts at that index. So we would now like to output that index, and that index is just the thread id i. And we output at scannedBackwardMask[i] - 1, because as already stated, scannedBackwardMask encodes the output positions of all the pairs plus one.

We also have two special cases:

Also, I call the output array compactedBackwardMask , because it will often end up much smaller than the input in.

The below image also illustrates the algorithm

To give an example, we output 6 to the index 4, because

And the output index is calculated as

Also, notice that thread 7, the last thread, outputs the length of in to the last element of compactedBackwardMask

We illustrate the kernel by the following image 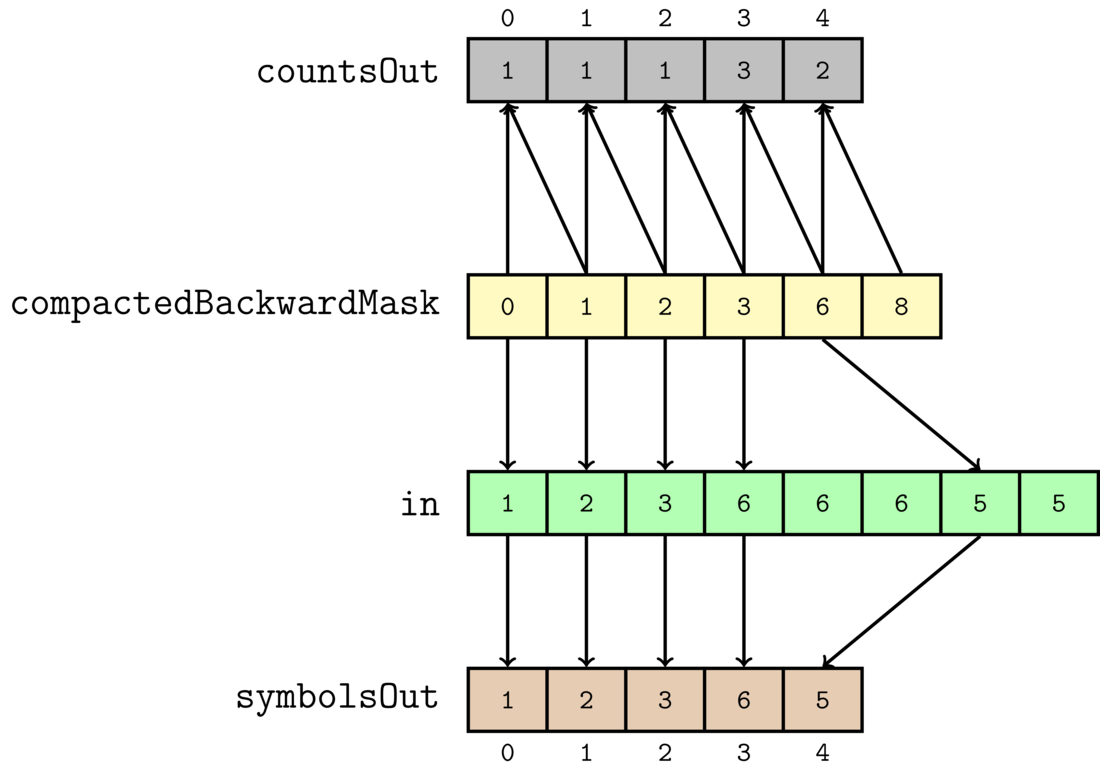 Now it should be clear why the last element of compactedBackwardMask was set to n by compactKernel.

It is also easy to compute symbolsOut. Because, again, compactedBackwardMask encodes the indices of the beginnings of the repeated runs in the original data. So we can just use that index to take the first element of that run from in, and store it in symbolsOut. So symbolsOut[4]==5, because

And that was the entire algorithm! As can be seen, it is much more complex than the CPU implementation. But when we benchmark PARLE, we will realize that all that extra complexity is well worth it

Now, how well does PARLE stack up against the CPU? Pretty well, it turns out.

I benchmarked PARLE for two kinds of input data. (1) Entirely random data on the form [1,3,5,2,...], and (2) very compressible data with lots of repeated symbols on the form [1,1,1,1,6,6,6,7,7,7,7,7,7,...]. The thing is that if the data is very compressible, then compactedBackwardMask will be much smaller than in, which means that the final scatterKernel has to do much less work. For that reason, compressible data should compress much faster than random data.

When benchmarking PARLE, I made sure that I uploaded all the input data to the device, and made sure to allocate all memory on the device before doing the benchmarking. This ensures that I will only be testing the actual performance of the algorithm on the GPU, and not the transfer performance from the CPU to the GPU, which is uninteresting for us.

I benchmarked PARLE on my GTX960, and obtained the following results: 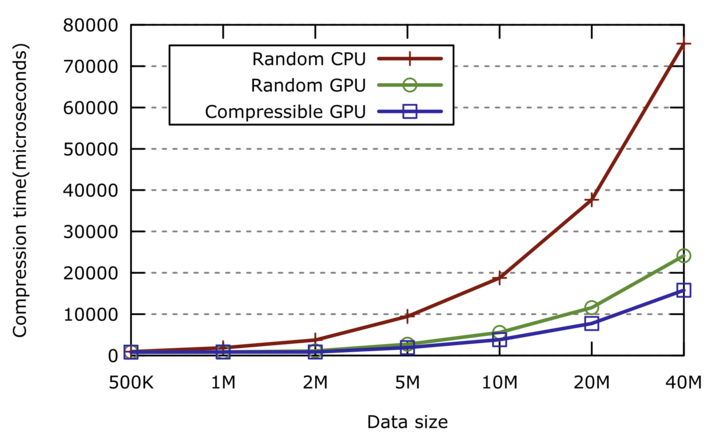 Note that I tested the CPU implementation of RLE on both compressible data and random data, but the results were so similar that I decided on just showing one of them for the CPU.

As can be seen from the above graph, PARLE greatly outperforms the CPU version for large data sets. PARLE is up to 5 times faster than the CPU. Ana claims that by using shared memory atomics, she is able to make it up to 35 times faster. But I have refrained from doing such heavy optimization in my implementation, in order to keep the code neat and readable.

For those interested, the raw benchmarking data that was used to produce the above graph can be found here

As stated above, Ana's implementation is up to 35 times faster than the CPU. This is because her optimized implementation uses shared memory atomics. When I profiled PARLE in Nvidia Visual Profiler, I found that the algorithm is heavily bottlenecked by memory; the arithmetic intensity is very low, so the execution time dominated by the time it takes to read from the global memory. So if you want to implement a faster version of PARLE, you will need to minimize your reads and writes to the global memory. And one way of doing this is, like Ana did, to use shared memory.